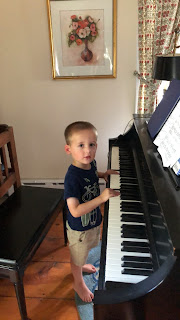 I had a great pre birthday, birthday and post birthday followed by a bad foot day. The bad day turned into more. Something re-activated the dreaded plantar fasciitis, making me a bore to anyone who hasn't suffered from it. One of my tennis buddies had it so badly that she had to skip tennis for a while and go to physical therapy. In between games on the court, she showed me some of her stretches. I feel like I know them all...I actually threw out my boot because I was done with it. The moral might be that even if you have a dumpster in your driveway, never throw anything out.

I have been going to the chiropractor and have contacted my orthotics guy, Ken Holt, because I wonder if it's just a matter of getting new orthotics.

A friend said he couldn't keep track of my birthdays, and I understood. One original birthday and four re-birthdays.

It was great to have the three kids and one cute little boy at my house for the pre-birthday. We ate outside and were going to stay outside (because, COVID) but Callen wanted to go in. We thought of not doing it but all of a sudden we were all inside. We spaced out and that was a while ago already so I figure it was OK. I loved seeing him at my mother's piano next to one of her paintings.

On the real birthday, I played tennis and went out to eat with Boyfriend, for the first time. People said that 30Boltwood, in Amherst, does a good job, and they were right.

A couple of days later, I got to go back to the Fairfield Beach Club, where I had great success in getting Callen's little shoes on him while Ben was busy with Nell. Callen had eaten a Spiderman pop and got more on himself than in his mouth. I suggested we go wash up. He took my hand and we headed off. That little hand in mine was worth the two-hour drive. I thought we were going to a certain bathroom but he led me to another room with a big sink in it. I picked him up and turned on the water, which he seemed to be trying to catch in his hands.

This of course makes me think of doing the same thing with my little kids. 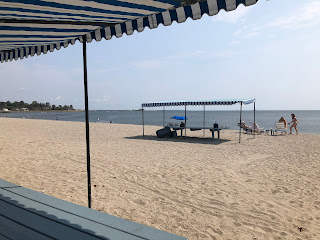 At the end of the day I enjoyed a swim in the calm Long Island Sound. I miss seeing the ocean at Cape Cod, but I think it was Katie who pointed out to me that since I'm not allowed in the ocean, this is a good fit for me. Ben pointed out that there were also no sharks.

If you don't care about feet, you can stop here.

On top of that, my neuropathy, which has been pretty tame, has gone on and off crazy. The other night, I felt like my feet were electrified. I don't post too much in FB groups such as Our Neuropathy Friends, because everyone is going to have a different opinion. But if a lot of people have the same opinion, for example on a kind of CBD that is effective, I might be interested. That group is recognized by The Foundation for Peripheral Neuropathy, by the way,

Hello! I haven't posted in a while because I've been doing OK, meaning, a low buzz in my feet but not that bad. 900 mgs of gabapentin twice a day, or an extra 300 if I want. I don't know what happened. Maybe it's the rain that is coming. My feet got totally electrified, on top of a return of plantar fasciitis. A while back I tried CBD, THC and a combination and was never that happy with the results so I stopped. I was just staring at some chocolate that is 1-1 and wondering if I should take a nibble but I didn't. CBD doesn't really do anything and THC makes me a little stoned, even if I take a little/ I guess it works to take your mind off the neuropathy but I've kind of been there done that with that feeling. As you all know it is very upsetting. I took 5 mgs of oxycodone before. Now it has worn off. Ibuprofen has a bad effect on my kidneys and Tylenol of course is bad for the liver. I put CBD cream on my feet and that helps a little. I guess my question is whether people have had good luck with CBD. The kind I have now is made by Good Body Products in Vermont, for what that's worth.

Mostly it was good to get a little support.

"People that dont deal with this problem have no idea of how debilitating and relentless it is," one said.

Mostly they are doing the same as I am, rubbing different things in their feet. One said he had it so bad that he had to stop work and apply for Social Security Disability.

Someone said capsaicin in a gel, but I put that on my toe once when I had problems and it burned my skin.

But then after a string of bad foot days I had one of my best tennis days ever. So in conclusion it's hard to figure.