Hanging in there...by a thread

When I got worried during cancer treatment @danafarber, my nurse, Vytas, wld call me a Nervous Nellie & say "They'll figure it out." Believing him, I relaxed a little. Without the same confidence in our great leader, there is no such balm w/ #coronavirus.

I'm not a big tweeter but I did want to share this thought. I remember Vytas sitting on the edge of my bed and saying "They'll figure it out." Vytas was a cancer survivor himself (lymphoma) and was one of us. He followed me wherever I went, starting from my diagnosis in 2003. I can't believe he has been gone for 10 years. He died not from lymphoma but from a heart problem resulting from the radiation he received. In looking him up to spark my memory about the year of his death, I came upon something I wrote. It was on Brigham and Women's Hospital's newsletter for nurses. The remembrance said,

A Newton resident, Mr. Durickas dedicated himself to patients, even when he struggled with his own health issues. His caring personality often made an impact on patients. One of those former patients is Ronni Gordon, a writer who blogs about running and battling with leukemia. She recently wrote of her memories of Mr. Durickas.

“Over many years and through four bone marrow transplants, he always took that extra step. His kindness and sense of humor helped me get through many tough spots,” she wrote. “I’d panic over some new detour on the road to recovery, and he’d calm me down with a mix of knowledge, a talent for putting things in perspective, and, always, something funny.”

The nation needs a Vytas, and we don't have one. Couldn't we even have someone with at least a voice that isn't grating, someone with a calm tone, such as I heard in the message that my Congressman, Richie Neal, left on my answering machine in giving a heads-up to an upcoming informational call that he would be giving? This article in The Atlantic, "No Empathy, Only Anger," , lays out the tone and substance of the administration's failure. The news is so all around bad, from two Republican senators dumping their stocks before the economy went bad, to mismanagement and missed opportunities, that following the news is sickening, but not following it is not in my nature. I am trying to limit as much as I can. For example, last night I didn't read or watch one bit of news, instead catching up on Grace and Frankie.


Given absence of guidance from the top, states, localities, communities, and individuals and friends and family are trying to fill in the gap. Kudos to Serenity Yoga (and others) for setting up a virtual studio. I did my first class this morning via my laptop and enjoyed connecting with others and keeping up my practice. Afterwards, I had a FaceTime coffee chat with a fellow yogini. Last week four friends and I tried to share a virtual cocktail hour. There were some technical difficulties, but I guess we'll have to learn.

I've been to the supermarket twice and hope to not go again until this clears up. I wore a mask and gloves, but the mask kept slipping, and as I tried to fix it behind my ear, I thought about how I should not be touching my hair. My friend the pharmacist said he thought I was OK, but the concern afterwards really dragged me down. I'm either going to use online means or go to River Valley Coop, which has started curbside pickup. THEN you read about how you have to wipe your groceries down (which I didn't do) because who knows who has touched what.

My kitchen is ready to be painted, but I'm not sure if I should let the painter in. As of this writing I have said to put a pause on all of the house repairs. It's not finished but it's good enough. I do go back and forth on the kitchen. I would like to have the kitchen back...

It has been pointed out to me that being quarantined is nothing new to me; I learned how to live with limitations after each of my four stem cell transplants. But at least then I knew what the enemy was. In the case of the virus there is so much uncertainty.

There is still dog walking and following the dog around the house taking photos of her or getting a hug. On one of the nice days this week, I played singles with the BF. I evened out the playing field by making up rules as we went along, such as if he hit a serve that I couldn't return, I got a mulligan. (I gave him some second chances too!)

Absent tennis at the club, I am trying to do a little more running. The other day, I ran four (up and down hills) and walked two. It's not easy to get out the door like it was in the old days, but it's doable, and once I get going I'm grateful for it. I can almost forget what a mess we're in.

Posted by Ronni Gordon at 11:37 AM No comments: Links to this post

Worried about virus, happy that my kitchen is coming along 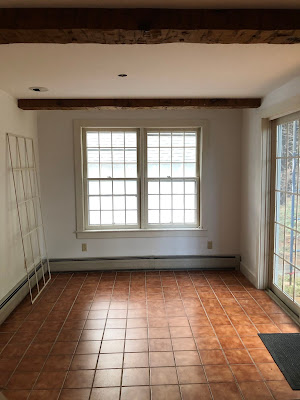 The barrier separating the dining area from the kitchen came down today. It looks strange with no furniture in it! Also it echos. The walls are primed and ready for paint. Some people volunteered to help me (thanks Jen and Mimi) but when I went into the paint store, I gravitated to the color that I think I want, natural linen. I thought of going back to get some other samples but sometimes the first thing you choose is the one that you end up liking the most, and also, the virus. (As in, not spending too much time shopping, but I went to the Big Y to pick up a prescription today and ended up there for an hour because it was mobbed with people preparing for what they seem to think is the apocalypse. And no hand sanitizer...)

Lower down in my last post you can see what it looked like just a week ago.

Today I have a story up about the uncertainty facing "older people" who are most at risk. It is featured on Next Avenue, the PBS-affiliated website for people 50 and older. The editor wanted it in two days, and I am pleased to say that I have not forgotten how to write on deadline, thanks to my training in the daily news biz.

The story started like so: The other night I was so worried about the coronavirus that I took five milligrams of Ativan, but all it did was make me feel hung over. The next day, I ran four miles and walked another two. Neither helped.

“I shall die of eating an unwashed grape,” I said to my dog in my best Blanche DuBois impression.

I survived relapsed leukemia — with an apparent record of four stem cell transplants — and am worried that after all I’ve been through, COVID-19 will be the end of me. None of the available information has allayed my confusion and concern over who exactly is at the highest risk. You hear that the high-risk group is people over 60, then, people 70 and older. Or those with high blood pressure. I concluded that I was going to skip everything but tennis, but, after I went to tennis (where there were many people including the doctor who diagnosed me), I felt that I shouldn't have done it, and I think I'm going to have to look for subs.

You can read the story here.

That redhead in the trippy Celebrity Cruises commercial is sure getting a lot of sun. I thought it might be a commercial for skin cancer. I wrote about some of the weird qualities of the commercial   this post  . Until I had so much trouble with skin cancer, I didn't see so many things through its lens.

For the same website, I also wrote about the ways in which I've been lucky. I didn't write about this, but today, Friday the 13th, is lucky for me, because Ben, my first born, was born on a Friday the 13th. I wrote, "Nobody should say you’re lucky to get cancer, but luck is a matter of degree. For example, an acute myeloid leukemia (AML) patient like myself is lucky compared to one who got the blood cancer before stem cell transplants became common practice. In great part, we owe our survival to the so-called Father of Bone Marrow Transplantation, Harvard-trained researcher E. Donnall Thomas, who I wrote about in a piece on what it’s like to be a chimera, a person with two types of DNA. In 1957, Thomas published a report of a new approach to blood cancer treatment: radiation and chemotherapy followed by the intravenous infusion of bone marrow.
Posted by Ronni Gordon at 4:17 PM No comments: Links to this post