Driving around in cars with ex on our anniversary 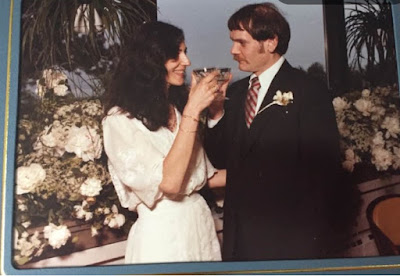 Today is my wedding anniversary. I spent some of it with Jim (that would be my ex, if you don't know), driving around doing some business involving Katie's car. I drove it down to Enfield and followed him to the Ford dealership, where he left it for a transmission repair that is under warranty.

Then he drove me home. And we argued the whole way.

HA, not really, that is a flashback.

Actually we had a nice drive talking about this and that. We have a lot in common, of course starting with our three wonderful children, but also including love of newspapers (though not all that they have become) and admiration for good writing and annoyance with bad grammar specifically and bad writing and general. Back in the day when we lived in sin in Florence, we would go down to Jake's for breakfast, spread our Sunday newspapers out, and talk about interesting stories for as long as we saw fit to sit there.

Today while Jim was in the dealership, I looked at my phone and saw a tweet that inspired me to ask, when he came out, if he edits everything he reads. He nodded.

Someone was tweeting about myelodysplastic syndrome, or MDS. The writer said, "Here are the symptoms." Instead of following through, he listed the functions of red and white cells and platelets. It was just a tweet, but still, I wanted to reply, hey, if you're going to tell us about symptoms, let's hear them.

(According to the Mayo Clinic, "Myelodysplastic syndromes are a group of disorders caused by poorly formed blood cells or ones that don't work properly." In the beginning there are no symptoms, but later there is a long list of symptoms, such as fatigue, similar to leukemia's. )

I reminded Jim why I'm interested in MDS. It is what the brilliant jazz saxophonist Michael Brecker had before he got the acute myeloid leukemia that led to his death. The drive to find a bone marrow donor for him is how I got my donor, Denise. I wrote about it for the Philadelphia Inquirer, the late musician's hometown newspaper.

So, talking about a pet peeve led to talk about life and death.

We had talked on the phone early in the morning about another kid-related project: getting the old lawnmower serviced so that Joe can use it. About to leave for tennis, I told Jim that he could go into the kitchen and get the garage door opener so he could get the lawnmower out. He was going to put it in the back of my Subaru to get it serviced while I drove Katie's car to tennis.

True confessions: I scurried around the kitchen trying to clean up quickly. It didn't look that bad. But compared to the way he lives, it is a big mess, and I didn't want him to see it. If you asked me why, I wouldn't know exactly what to answer.

Last year I wrote an intense post about my memories of our wedding day. One of Michael Gordon's photos illustrated it. Facebook kindly offered it up today as one of those memories "we care about," so I thought I'd use it again.

I got weepy thinking about all the people from that day who are no longer with us. Notably, of course, my parents. I talked to Katie about the car and other stuff and then we started laughing about a bunch of things and then I forgot to be sad.
Posted by Ronni Gordon at 8:49 PM No comments: Links to this post