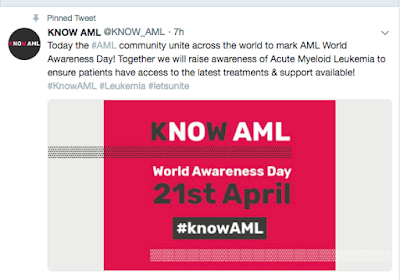 The Leukemia and Lymphoma Society (LLS) sent an email stating that today is AML Awareness Day. Who knew?

"Acute myeloid leukemia (AML) is a complex, rapidly progressing cancer that has seen few advances in treatment even as therapies for other blood cancers have taken remarkable leaps forward. Since the 1960s, five-year survival rates for many blood cancers have doubled, tripled and even quadrupled. Today, only one in four AML patients survives five years after diagnosis.

"AML is one of the deadliest blood cancers and the most commonly diagnosed form of leukemia in adults. It is extremely complicated to treat because it is not a single disease, but a group of more than 10 different major subtypes and other rare mutations. With advances in genomics, we can now identify and target specific types of AML. This precision medicine approach is the key to new therapies for patients."

It goes on to give details of its Beat AML Master Clinical Trial, which employs precision medicine to give the right therapy to each patient based on specific AML subtype.

The website Know AML  states, "Know AML was initiated on the 2 December 2016 in San Diego, CA during the American Society of Hematology (ASH) 58th annual meeting.

"During ASH, a collective of AML patient leaders, professional representatives and industry supporters gathered to formalize how to mark AML World Awareness Day 2017. Their aim was to raise awareness and education in AML to Patients, Carers & Families, Healthcare Professionals and the General Public."

The website suggests different ways for people to help spread awareness of the treatment and support options available. They want you to wear red and black, and, "Everyone is encouraged to share their activities, so if you could film or photograph wearing red and black and then share it on social media using #KnowAML, you will appear on our activity wall.

1: Carers is actually a word. I thought the word was caregivers but I looked it up and saw the shortened version.

2. Colors are silly. Not going to wear red and black. In any case all I can think of is Stendhal's"Le Rouge et Le Noir," which, like the author of this story, I read when I was about 17.

3. Yesterday when I went to have my blood pressure checked, my internist said he didn't know anything about it. I'm all for AML awareness, but it's kind of grandiose to start something and call it World Awareness Day. (By the way it was down to 128/82. He said that was pretty good, not great. I was surprised because I thought it was good. They have changed the guidelines to make it even lower but he said it was good enough and he wasn't increasing my dose of blood pressure medication.)

4. This caught my eye from the LLS email: "Today, only one in four AML patients survives five years after diagnosis." Not that I need reminding, but it reminds me how lucky I am to be alive.

5. When a whole bunch of information comes at you, it's useful to look at where it's coming from.

The LLS trial has the backing of the FDA and is a led by blood cancer researchers from leading medical centers with input from drug companies. Know AML is chock full of studies by leading researchers, but the supporters are all drug companies. This made me leery about a potential bias towards certain treatments from which they would benefit.

For example, in this story about a 70-year-old with symptoms, he is quoted as saying, "My new oncologist recommended the same decades-old standard of care for AML, which is an aggressive chemotherapy regimen. I knew the treatment would have harsh side effects and would not cure my AML.”

I wondered, how did he KNOW the traditional regimen wouldn't work, besides the concern over his age?

He went with a targeted therapy offered through a clinical trail, using a drug that would only go after the cancer cells instead of the kind of chemo that I had, which wreaked havoc in my system.

Great that they can have more alternatives now.

The professional sponsors are European LeukemiaNet and Haematology Nurses and Healthcare Professionals Group , totally legit, but the major backing of "big pharma," could at least make you wonder.

6. If this is too much information for you, the reader, I apologize.

It was also probably too much for me. For example when I started reading about 10-year survival rates for patients with different mutations and with different kinds of treatments, I realized I was getting into territory that has always made me uncomfortable.

I never wanted to know all that stuff.

My late great friend Patricia did want to know, and we used to have lively discussions about how to decide what is too much information, or too little, or the right amount.

I'm sorry that she is not here to discuss this great big information dump. We probably would have laughed about it, thereby smoothing over our discomfort.
Posted by Ronni Gordon at 8:37 AM 1 comment:

I was a little worried about transportation to Dana-Farber on Wednesday because I had gotten used to my private driver (Katie).

When the driver called to confirm, his pleasant voice reassured me.

The ride was better than extracorporeal photopheresis, or ECP, the light therapy on my blood.

I had a bad feeling when the nurse at the Kraft Family Blood Donor Center put the needle into my left arm. It felt like it hit the wrong spot. I told her so but it looked OK so I can't fault her for continuing the process. I looked away and felt a patch of warmth spreading on my arm. When I turned back, I saw that it was blood oozing.

She called for help. A couple of other nurses came over with gauze. She put pressure on, and the gushing stopped. Mark, one of the more experienced nurses on the premises (the first one who got me to use two arms) came over and put something on to stop the bleeding. My nurse wanted to still use two arms. He said that because they put in heparin for a blood thinner, that wouldn't be a good idea.

I usually take out my computer and watch something (last time it was a whole episode of The Crown), but I didn't have the energy. I browsed through the New Yorker I had brought.

Near the end, she dabbed hydrogen peroxide on my shirt to try to get the blood off. Not all of it came off. Luckily it was an old shirt.

"Sorry about the geyser," she said.

Instead of leaving at 6:30 p.m. as I had told the driver I had expected to do, it was closer to 7. Luckily since he was one of the good ones, he didn't complain.

I was pretty beat but stayed up to have something to eat.

The next day, I had tennis. It is a contract and you need to find a sub if you're not going to play. Since I wasn't sick, I figured I would go. It wasn't great, but it wasn't bad.

On Friday, I went for my session at Amherst Community Acupuncture. I originally went in search of treatment for my neuropathy. I still have those pins and needles in my feet, but I think it might be slightly improved. I have definitely felt some other benefits. For example, the chronic pain under my left shoulder blade has diminished so much that sometimes it doesn't hurt at all. After the episode with the geyser, it started to hurt again. But after treatment, once again the pain went away.

In any case, I always have a nice nap and leave feeling calm and relaxed.
Posted by Ronni Gordon at 7:10 PM No comments:

On kids moving in and moving out