Thinking of different ways to treat a headache

Due to the lingering headache after the car accident, on Thursday at my checkup Dr. Alyea said I should get a CT scan in case there was a little bleeding on my brain. He said it would not be the biggest deal if it was because then a neurologist could just put a needle in my skull and fix the problem.

It sounded like a big deal to me, but luckily the next day the CT scan showed I did not have bleeding on the brain. It's a good thing I didn't need to get a needle in my skull because first of all it did not sound like fun and secondly, I have enough of needles. The day before at the light therapy, I thought my nurse had gotten the needle in my troublesome left arm on the first try, but it was too good to be true and she had to do it again. All these days later I have a big black and blue mark. It's not a pretty picture but since I like purple I thought I'd take a photo.

At least before the light therapy, when I had my blood drawn for my checkup, I asked for and got Tina the nurse who used to be my BFF in the Kraft Family Blood Donor Center and who moved over to the blood draw on the second floor. She knew what kind of needle I needed in the right arm, for the return, in the photopheresis (light therapy for my graft vs. host disease)  that I was going to get after my appointment. So she put it in and left it in and said to tell them to remember to take it out because if I went home with it she would lose her job.

So, in case this is confusing, the timeline was, 2 p.m. blood draw, then appointment with Dr. Alyea, then the light therapy at 4.

At my appointment, Dr. Alyea said I could possibly cut down on the Valtrex. I said the last time I did that I broke out all around my lips. He said to get two shingles shots first (yay, more needles) and then try to cut back. I can get the shots at my pharmacy.

I have had to take more ibuprofen for the headache than I care to take. Ibuprofen: bad for kidneys, Tylenol: bad for liver; oxycodone, well, you know. I have settled on a low dose of the ibuprofen, maybe one tablet when needed. The Saturday before, I woke up with a headache and took a pill because I didn't want to have a headache for going to the UMass basketball game with Ben, Nell and Katie to hear Joe announce.

I love to listen to Joe announce. I loved watching my baby watch the game with his baby. I love hanging out with Katie. Love, love, love. As writers we try not to be repetitive, but I think it's OK if you're repeating the word love. 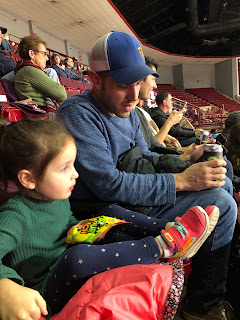 I didn't get to see the whole game because Nell was afraid of the Minuteman so we went out into the corridor and I bought her a little basketball and a big finger. She waved the finger at people passing by and said "Go UMass!" We played a little game to see how many people would answer. A lot echoed her. At that point my mind wasn't on headaches or needles.

Thank you for sharing
https://aab-edu.net/

My husband HAD AML in October 2016. He’s been in remission sin November 2016. Treated with chemo only. I worry way too much about him. Like you he is an avid runner a 5 time marathoner. I wish I could chat with you, maybe you could help m stop worrying and stop being paranoid. Thank you for your blog.

Help your body crush any possible tumour development by equipping your immune system with powerful antioxidants present in organic fruits and vegetables. The micronutrients in these foods power up your immune system, giving it the ability to wipe out malicious, cancer-causing cells. If finding truly organic foods seems to be a challenge, you can turn to C60 Black Seed oil from Live Longer Labs. It’s an antioxidant oil that contains C60, a naturally-occurring antioxidative and anti-inflammatory agent, and black seed oil known for its anti-cancer abilities. This antioxidant gel capsules help your body neutralize and flush out damaged cells that disturb the balance in your body to eradicate the possibility of developing cancer. Know how here: https://sarahwestall.com/why-arent-hospitals-treating-cancer-with-black-seed-oil/