A gazillion years ago when my friends from the newspaper and I were locked out of the Forest Park clay courts before our early morning tennis game, we would shimmy through the gap in the fence. Sometimes we had eight or even more, and one at a time we'd get in.

I thought of this Sunday after Katryn and I lay down on the cement and shimmied, belly down, under the gap in the fence on a walkway along the Cambridge side of the Charles River so we could cross the bridge to get to the Boston side, where we had started. We couldn't see an opening and didn't see any other recourse other than wandering around looking.

Just like when our newspaper group had gotten through to the courts, it was a triumphant feeling. Of course when we had gotten onto the tennis court, I was standing up, while the other day I was belly down when I got through. Katryn cheered me on. I rolled over and got onto my hands and knees. She offered me a hand. But I had to get up myself. I did it the usual clunky way. Kind of like how I take the third option when the yoga instructor says to get from the back to the front of the mat by hopping, jumping or getting there any way that you can. 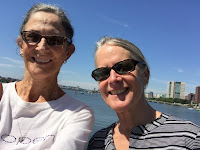 We had walked almost four miles by the end of our joint birthday celebration. We started and ended on Charles Street. My mother always loved it there. It is at the base of Beacon Hill and very chi-chi. We went to a gallery to look at a painting and came out with postcards, which were free and the only thing we could afford. We ended up at a Starbucks (there are two), and I got a red eye for the ride home.

Years ago, we started getting together on our actual birthdays, the last week of August, but it has gotten pushed back from year to year. When we can't do it in August, we say we're going to do it before the snow falls. I think this was the latest we ever did it. I drove back in the dark but it was worth it to see my college friend. Actually the better way to say it is "friend from college" just like I would say "friend from tennis" instead of "tennis friend" when I'm talking about certain people because they become more than a person defined by a place or thing.

Katryn lives in the Portland, Maine, area. So Boston is almost a half-way point. I think this is the third year we met at Panificio Bistro on Charles Street for lunch and then walked on the path around the Charles. It's where I used to run when I lived in Brookline. If you don't mind a little exhaust, it's a beautiful place for a run.

We didn't take a photo or use a hashtag but yes, we were still there. I found a photo from Aug. 21, 2016, and we look pretty much the same. That time we got it on our birthday week.

We've done some fun and interesting things. Sometimes we're inside, sometimes out. We've gone to the beach and to museums.

One year we visited the Isabella Stewart Gardner Museum, where we had lunch and walked around. It is the site of the largest art theft in the world.  Empty frames show mark the spots where the stolen paintings would have been. If you follow the link to the museum website, you can take a virtual tour of the stolen artwork. If you have information leading to the thieves, you can get a $10 million reward.

For our 60th birthday, we went on a tall ship sailing cruise in Boston Harbor, where we got to help hoist the sails. The year we went to the Peabody Essex Museum in Salem on Halloween weekend probably wasn't such a good idea. We somehow forgot about Salem and witches. The place was so mobbed, we thought we might never get out of there.

Many years ago the whole family came here. Somewhere I have one of those now-embarrassing photos of one of her children in a bathtub with one of mine. Naturally I wouldn't publish it.

Way before families, we biked around Nova Scotia. We had a wonderful time except for getting sick on the ferry ride back. The only ones who weren't sick, if I remember correctly, were two little old ladies who had taken their dramamine. Ha, well, they seemed old but maybe they were the same age as we are now.

Basically it doesn't matter where we are, because we have such good time laughing and talking.

GREETINGS everyone out there.. my name is (Robert Lora) I am from CANADA i will never forget the help Dr Ogudugu render to me in my marital life. I have been married for 8 years now and my husband and i love each other very dearly. After 6 years of our marriage my husband suddenly change he was having an affair with a lady outside our marriage, my husband just came home one day he pick up his things and left me and the kids to his mistress outside at this time i was confuse not knowing what to do again because i have lost my husband and my marriage too. i was searching for help in the internet, i saw many people sharing testimony on how Dr Ogudugu help them out with their marital problems so i contacted the email of Dr Ogudugu i told him my problem and i was told to be calm that i have come to the right place were i can get back my husband within the next 48hours, to my greatest surprise my husband came to my office begging me on his knees that i should find a place in my heart to forgive him, that he will never cheat on me again, i quickly ask him up that i have forgiven him. Friends your case is not too hard why don't you give Dr Ogudugu a chance, because i know they will help you to fix your relationship with your Ex Partner. Dr Ogudugu his the best spell caster around to solve any problem for you.
{1} HIV/AIDS
{2CANCER
{3}HERPES
{4}DIABETES
(5}HERPERTITIS B