More fun with fingernails, and why injections were not as bad as I feared 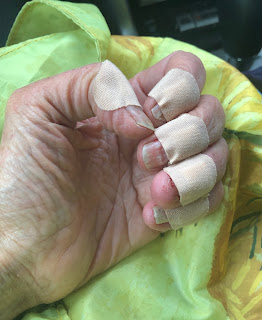 I wouldn't want to say that a bone marrow biopsy can prepare you for anything, but when it comes to pain and discomfort, it's right up there. I tried to keep that in mind when I went to Worcester to get the steroid injections in my fingers a couple of weeks ago. I thought she was going to do it in my cuticles. Somehow that idea was more freaky to me than what the  dermatologist actually did – injections BELOW the cuticle, in the top joint of my finger.

I asked if this was a series, and if she was going to do it in every finger even though not all were involved, i.e. disintegrating. The answer was yes (a month apart) and yes (for now).

To recap, the problem seems to stem from graft vs. host disease of the fingernail.

She's the only dermatologist who has used a freezing spray. It works well. I had read somewhere that doctors use a nerve block first. She said that would be worse than the injection itself. So she sprayed a little on each finger. The injection in each finger was quick. Just one sharp sting in each. They were bleeding, so she bandaged each one. I decided my hands looked like Nadal's when he tapes his fingers.

Someone had asked if I would have trouble driving, and the answer is no I didn't. I headed over to Margaret and Nick's for dinner. Always nice to integrate a visit with good friends, for good food and good company, into the medical appointments. Or with Diane and David for the same.

Then the next day to a different dermatologist to look at some spots, with directions to do the usual, treat my hands for five days with a combination of chemo cream, Efudex, and Calcipotriol, which you can do for a shorter time (five days) than just the Efudex. I don't know why I find it so annoying. Well yes, I do. It's a process. One tube has a top that doesn't fit on well, and it oozes all over the place. Put on gloves. Hands sweat. Take them off (the gloves, not the hands) in the middle of the night, without realizing it, along the lines of the days when I slept in rollers and pulled them out in the middle of the night.

Another nail, well, actually half a nail, turned so thin it was like tissue paper. The tissue paper part came off. Well, I helped it off. I hope the steroid injections help the part that is growing in to grow in properly.

I asked if anyone did this closer to where I live. She said that she and another specialist in Providence are the only ones who do it around here. I don't actually mind. Worcester isn't too far.

I am more annoyed by the problem on my nose. I wrote about that one here.

But hey, these things are fixable, and a lot of things aren't.