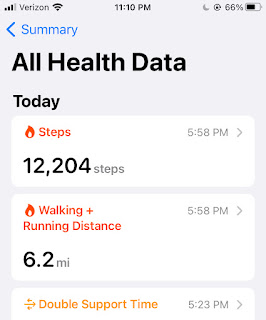 No I didn't, but I looked at my mileage and it was 6.2 miles with a combination of dog walking, walking with a friend, and a few miles of jogging.

I was so excited after the second dose of the vaccine that I went for a run. I felt better the first couple of days after and then on the third felt a little off...Just that feeling that you are fighting the flu. Hopefully it's a good sign.

The other day I went jogging before the rain and ended up being passed by a young guy who was really kicking up his heels. He sped by me. Harumph, I thought. Then I thought, wait, he's a small fraction of my age and most likely hasn't had four stem cell transplants.  And then also I don't think I ever had such good form.

Once I got home, the good old negative self-talk kicked in again. I know that a loop that I like, up the Park Street hill with the Mount Holyoke lake on the left and back down on Morgan Street and going a little past my house on the way back, is about three miles. I got back and checked my phone (no Apple watch for me) and saw 2.9 miles. WHAT? I thought it was three...Well I walked around the house for a minute and then it was three.

This is now and that was then...three miles isn't that bad and also better on my knee.

Last year, after our Zoom seder, we wondered if the next year Passover would be in person.

Well, it wasn't. Thanks to Diane and David, though, we saw a lot of people, since their second Zoom seder had some 50 participants. The benefit is that you can have people in different time zones in the same place. The downside is that you can feel forlorn when "the meal is served" and everyone has disappeared. Last year, we got it together to all make dinner and eat together in our family Google Meet. This year for some reason none of us did. I got a chicken but didn't make it until later in the week. Boyfriend and I had leftovers by candlelight, and while he was heating things up I talked to Katie via FaceTime, since she shared my forlorn-ness.

Six of us with expertise in illness and recovery read a little something about what we had learned. I don't know why I was nervous about doing it; it was all friends and family. I get nervous though in even this little bit of public speaking. I could have declined when David asked me to do it, but I figured that if I could face leukemia multiple times, I could do a little reading.

Here's how I began it, with apologies to Joe and Diane:

I know a thing or two about how to not get out of a lockdown gracefully. For example, you don’t overestimate what you can do and you don’t get so flush with freedom that you go running and neglect to look where you’re going and trip over a root and crack your head. Then two weeks later you don’t forget that you are a little weak and get on a bike and fall off and crack your head again and get another concussion and stitches in the same eye that is still black and blue from the last time.

It’s hard to avoid the temptation to rush back to normalcy but my most successful results came from being more deliberate and focused.

But I have to say that now that I am two weeks post my second vaccine, I want to plan more than one thing. I haven't done it yet. I got a ride in a friend's car, and that was the most exciting thing so far. It's going to take time to inch back into normal life.

Thanks for sharing it is Very Informative page, I hope it will be useful for all of us. , India's indigenous COVID-19 Vaccine company Bharat Biotech IPO to get more valuable Informative about Covid 19,